Lotus STEMM (Science, Technology, Engineering, Mathematics & Medicine) is an organization that provides networking and leadership opportunities for young South-Asian girls in STEMM. It is based out of Canada. Roopali Chaudhary, a molecular biologist founded Lotus STEMM when she realized the need for representation of South Asian women in Science. Lotus STEMM currently provides a platform for mentoring of girls older than 16, a mental health support group for international academics and a blog featuring the stories of South Asian women scientists.

Degrees of Success (DoS) is an initiative that hopes to introduce girls aged 9 to 16 to women scientists from South Asia. The event has a week full of fun-filled activities and discussions on how to succeed in STEMM. The participants learnt about Space Science, Earth Sciences, Chemistry and Biology! The panels had diverse speakers who discussed topics such as South Asian culture, curiosity & gender discrimination. The event was free of cost and catered to young girls predominantly from Canada and few from India.

The keynote speaker, Ananya Tina Banerjee is an Assistant Professor in the Divisions of Social & Behaviour Health Sciences and Epidemiology, University of Toronto. She talked about her research on Type-2-diabetes prevention for South Asian communities in Canada. She discussed the causes & patterns of diabetes, the communities affected and prevention programs for diabetes. All in the context of South Asian immigrants living in Ontario, Canada.

There were four workshops that engaged children in STEMM activities. ‘Family and I code together’ workshop that simplified coding; ‘Become a researcher’ where an online virtual lab was used to understand genetics; ‘Build a Nano rover’ where space engineering was explored; ‘Starburst Rocks’ where geological concepts were understood through moulding candies.

There were two career panels conducted. They had eminent speakers discussing their career paths, South Asian culture, gender and childhood. While the first panel observed speakers from Lotus STEMM, the second panel had diverse panellists from different backgrounds and ages. 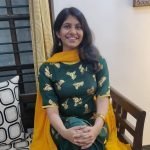 Manasvi is an aspiring science communicator who has blogged at various platforms such as Lotus STEMM, Science Gallery, The Life of Science, Back your science and Sciteum. She is currently pursuing her Master's degree in Plant systematics. In her free time, she can be found cooking with her grandma, ranting on twitter and humming to Taylor swift.

Extreme Life — Machinery Behind the Scenes