Indian researcher Sobhika Agarwala’s interest in science began from the age of 12 when her parents had enrolled her at The Assam Valley School. Her adolescence spent in the premier 240-acre private residential school set amidst the lush tea gardens in Assam had laid the foundation to holistic education. She fondly remembers, “escaping into the air-conditioned library to dodge hot days and read science magazines, like the New Scientist.” Reading science magazines over the years, tempted her to pursue a bachelor’s in biotechnology.

In 2006 there was a dearth of academic courses in biotechnology in North-East India. Since Bangalore was known to be the “biotech hub”, her parents supported her in pursuing biotechnology at Manipal University in Karnataka. Her time at Manipal University exposed her to a broad range of subjects. In the final semester, she worked in the Toxicology department at the university for her thesis project.

Given a lack of prior coursework in Toxicology, it was an unusual choice, but it paid off! Conducting experiments taught her technical skills, like holding a pipette. The research work introduced her to the thrill of scientific discovery. Most BSc students in India do not have access to such an experience.

Sobhika’s passion for science, love for travel and discussions propelled her to study masters at The University of Manchester (UK) with a unique focus on research. She recalls, “almost a decade ago it was unheard of, of academic curriculums offering MSc by research in India. Although there were some universities requiring the submission of a thesis for completion of the master’s programme, most colleges offered 2-year MSc courses with limited practical coursework.” A common trend among MSc graduates was to work as research fellows, in established laboratories in India, prior to applying abroad. This would allow them to learn laboratory skills.

In the “MSc by research” programme, Sobhika had completed two projects through rotations in developmental biology laboratories. These projects acted as stepping-stones to a PhD. Through these experiences, she trained in research and expanded her professional network through interactions with international scientists.

She recalls, “back then, there was a dearth of PhD funding for international students in the UK, and a self-funded PhD was not viable”.  She packed her bags to pursue a PhD in Germany, a land of ample scholarships, well-known laboratories, and scientific freedom. During her PhD at the University of Freiburg (Germany), she pursued her interest to study genes in organ development. Using molecular biology techniques, she identified novel genes regulating the growth of the sensory organ system called the lateral line system, in zebrafish. The lateral line system is composed of a plexus of sensory hair cells called neuromast that senses minute changes in water flow.

The admission process to a PhD programme overseas required meticulous planning.  Sobhika advises, “Indian students need to be aware when seeking a research opportunity, they must address the professor by their full name and avoid using salutations like Sir or Ma’am. Prior to writing to any professor, look through their research work on the lab website, read their recent scientific publications and then write a statement of research interest accompanied by a well-formatted resume”.

Sobhika’s interest in stem cell research led her to a post-doctoral project at the University of Wisconsin-Madison (USA). She soon realised, “the majority of post-doctoral fellowships were available for the US citizens or green card holders, leaving very few accessible to international candidates. One option was the Life Sciences Research Foundation post-doctoral grants, but they depended on crowdfunding.” She was a successful recipient of the American Heart Foundation Fellowship (AHA) which caters to cardiovascular research.

Sobhika is currently using the AHA award towards identifying cells that surround blood stem cells and maintain their function lifelong using zebrafish as a model. Blood stem cells are cells that can further develop into any type of blood cell — red blood cells, white blood cells, or platelets. She alluded her successful post-doctoral award to, “scientifically sound research proposal and robust training plans, well-discussed with her supervisor prior to submission.” She also recommends applying for the K99/ROO: Pathway to Independence awards which facilitates post-doctoral researchers to become independent investigators in the USA.

She observes, “compared to Europe, the scientific ambience in the USA is largely publication driven which often creates tremendous pressure on the post-doctoral researchers. Held hostage with the type and length of visa the supervisor agrees to support, non-standard post-doctoral pay scales, and limited tenure track positions can make the situation precarious.” She also says, “irrespective of the country, the ambience of the lab depends on the principal investigator, colleagues and it never reflects the work environment of the entire institute.”

Sobhika’s academic journey has spanned across multiple continents. It has given her opportunities to mentor younger colleagues through feedback on their discoveries. After acquiring extensive international experience Sobhika reckons, “setting up a lab in India especially in North-East may be challenging due to limited research grants, inadequate scientific resources and the prevalent hierarchical mindset.” Sobhika’s advice to the upcoming generation of science students in India, “identify your area of interest prior to commencing a PhD or job, actively seek work experiences in academia or industry” and the obvious: “work hard.”

Acknowledgements: SciRio thanks Sobhika Agarwala, PhD for allowing us to use the images in the piece. 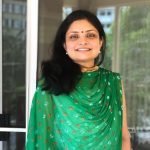 After completing her PhD in Vascular Developmental Genetics at the University of Queensland (Australia), Dr Smrita Chaudhury is a freelance medical writer and science journalist.

Compelled to return to Manipur, a researcher is building regional startups