The NeuroNovember Convention was a uniquely curated 4-day convention that allowed individuals of different ages, professions, and countries to delve deeper into the fascinating field of neuroscience. With over 800 registrations, and 39 speakers and panellists from across the globe – a fair representation of women, trans persons, and people of colour – this convention not just covered science but consciously took the effort to address the social issues faced in STEM.

The convention was as good as it sounds, and it’s okay if you missed it. Read on to know the major highlights, some behind-the-scenes moments, and finally how you can access the talks, art, writing, and presentations of the event.

The inception of NeuroNovember cannot be discussed without first mentioning the humble yet interesting beginnings of the two youth-led teams that conceptualised it.

Interestingly, virtual platforms sowed the seed for both organisations’ inception independently around the same time! Project Encephalon started with a ‘Hi’ in the chatbox during the Monsoon Brain Meeting, which led to the formation of the Student Interest Group in Neuroscience (which later was named Project Encephalon). On the other hand, Stimulus was formed with its co-founders exchanging some emails to make a group that advocates for the youth’s education in neuroscience and psychology.

The idea of NeuroNovember was brought up during an online call between Stimulus and Project Encephalon in August. With barely two months to plan the event, we began brainstorming, developing connections, writing emails, etc., to begin the process of this one-of-a-kind event. Due to the pandemic and people’s dependence on technology, it was fairly easy for a team of youngsters to make a team and execute an international convention.

But not easy enough. NeuroNovember was important for all who made it possible. It was not just any convention, but a reflection of how this particular group of young people wanted future conventions to be free, accessible, inclusive, and informative.

While conceptualising the events, the team had a clear plan of addressing topics related to diversity, discrimination, and underrepresentation in academia. The team desperately wanted to make an element of this convention catered to school children so they could share their knowledge and become part of this adult event with the thought that they aren’t too young for conventions. The team also thought about alternative forms of communicating science through art and fiction writing. The events Two-Minute solutions, NeuroArt, and NeuroFiction attracted many students, artists, writers, and encouraged people of science to explore other means of communicating their science.

Throughout the four days – 21st, 22nd, 28th, and 29th November, each speaker shared their work in the field of Neuroscience, and the audience was fascinated by the length and breadth of the subject! The first day began with Prof. Peggy Mason as our keynote speaker on bystander effects in rats. Prof Mason calls herself a neuro evangelist, interested in teaching neurobiology to anyone who will listen. On those lines, she writes a blog and has offered a massively open online course, Understanding the Brain: The Neurobiology of Everyday Life through Coursera. After the session, Prof Mason interacted with the participants with a wholesome Q&A session for 40 minutes! Her talk was followed by multiple intriguing talks delivered by some of the greatest minds in neuroscience and allied fields including neuro-rehabilitation, neuro-musicology, neuro-psychopharmacology, neurodegenerative disorders, science policy, computational neuroscience, cognitive and behavioural neuroscience.

Since the convention was for the youth, we created competitions and events meant for high-schoolers, undergraduates, and beyond! Needless to say, all the competitions held by NeuroNovember were open for everyone and were judged through a single-blinded method. Single-blinded judging allows the judges to avoid biased opinions based on age, gender, caste, place of education, etc.

The highlight of NeuroNovember was the Indian Institute of Technology, Gandhinagar (IITGN) virtual Lab tour that gave participants a glimpse of the equipment used in the Centre for Cognitive and Brain Sciences Labs. The tour covered a basic introduction to machines commonly used to study neuroscience such as an Electroencephalogram, KINARM, Digitising Tablet System, Transcranial Direct Current Stimulation (tDCS), and Transcranial Magnetic Stimulation (TMS). The video was followed by a 20 minute Q&A session with the lab members and faculty – Prof Pratik Mutha. The session proved quite useful for the students attending it as it gave them greater insight into the Cognitive Sciences courses, universities, eligibility, equipment offered in India and allowed interaction with the faculty members.

The panels were a space for great minds to come together and share their perspective on STEM education, research opportunities, science communication, disability, diversity, and discrimination. Science has seen its fair share of discrimination and underrepresentation and the NeuroNovember Convention did its best to address these issues. Like many event organizers, it was not easy for us to reach out to the underrepresented speakers and audience. Then came the issue of being politically correct and not offending anyone while approaching or referring to them. Such challenges were like a breath of fresh air for even self-proclaimed woke youth and we cherished these experiences.

For young enthusiasts who aspire to do such events in the future, you can read our article on the challenges we faced as an online team and a youth organization without affiliation.

This event would not have been possible without the consistent efforts of the amazing team and volunteers of the NeuroNovember Convention! We would like to acknowledge our sponsors, WINStep Forward, Oxford Abstracts, ProWritingAid, Todoist, WorldViral, BiasWatchIndia, and Sci-ROI, who helped us keep this convention free of cost. We would also like to express our gratitude to the Indian and International STEM organisations and communities who have supported our cause. This section will be incomplete without our audience, who turned in large numbers to attend the convention and provided us with the opportunity to reach out to them.

Facilities at the Centre for Cognitive and Brain Sciences Shriya is the Co-founder of Stimulus and was the Convener for the NeuroNovember Convention 2020. She currently works with IIT Gandhinagar on Outreach projects for Cognitive Science. Her past successful project includes the Brain Awareness Week in May 2020 with support from the Dana Foundation and International Brain Research Organization (IBRO). She is also a passionate environmentalist and conducts campaigns that encourage people towards adopting a low-waste lifestyle. 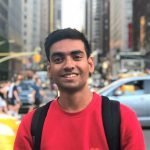 Amartya was the Convener of the NeuroNovember Convention 2020 and is serving as the Executive Vice President of Project Encephalon. He is also a Junior Research Scholar with Dr Vidita Vaidya at TIFR-Mumbai. A former Khorana Scholar, Amartya is studying circuits underlying anxiety and depression, and possible therapeutic interventions of hallucinogens. Outside of lab chores, he enjoys dancing, hiking, travelling places, exploring cuisines, and volunteering for social causes.

Getting the most bang for the buck