A rocket transports three panels to the international space station. A robotic arm then exposes these panels to the expanse of outer space. Three years go by and the panels are sent back to earth. By this time, they have been exposed to extreme temperatures ranging from 120° to -100°C and the vacuum of space. Back on earth, the panels are analysed and the results shock Yamagishi and his team of researchers from ISAS Japan. Except for a few outer layers of bacterial cells, everything else survives. The organisms are Deinococcus species of bacteria. Radiation from the sun and lack of air in the vacuum could obliterate other cells.

Deinococcus cells, however, are resistant to the destructive effects of these conditions. The scientific community knew of their existence, and similar life forms had been known to exist. But how did these organisms survive the harsh habitat of space? How do they thrive in extreme conditions? Before I attempt to answer these, let me introduce you to a class of life forms called ‘extremophiles’.

No one knows how or where life began, but we are pretty certain that our planet hosted it first around 3.5-4 billion years ago. It would take millions of years before the planet transforms into what Carl Sagan called “The pale blue dot”. Before it turned into the cosy little sphere we call home, the earth had an oxygen-free toxic environment. This may come as a surprise but such conditions still exist and they are blossoming with life. Organisms that live in such extreme conditions are called extremophiles.

It is difficult to track who discovered them first, it was in the early1960’s that research on these organisms garnered pace. At first, it was hard to believe that an organism could survive in humanly intolerable conditions. Scientists first characterized such bacterial species from the boiling hot springs of Yellowstone National Park. They were named ‘thermophiles’ –.But this was just the beginning.

The lid on our jar of knowledge blew straight off when similar species were found in ocean beds. The true horrors of such a place cannot be explained by words, but let me try it anyway.

Imagine 340°C boiling water, but wait! It will not boil because of the high pressure on it. A cocktail of acidic spills from the inner earth’s mantle that could melt our bones in a matter of seconds, adds to the difficulty of surviving in such ecosystems. Yet, life found a way in the form of several single-celled microbes amongst which one is known simply as strain 121. Not surprisingly, it can live and reproduce happily at 121°C.

We know that earth has seen such conditions millions of years before. During this time period, the planet was filled with acidic lakes and the air was made of toxic fumes. Such conditions continue to exist in some places on earth and the thermophiles inhabiting them pack some surprises!

In the opposite spectrum, there exists life that never freezes. These are the second most popular category amongst extremophiles and are known as psychrophiles! We all know that water expands when it freezes. Imagine temperatures as low as -60°C. There is the life that never freezes –not even at such bone-chilling extremes. These are called psychrophiles!

Psychrophiles rule the ice-cold habitats. Their study goes back as far as 1902. Consider this: 10-11% of the land is covered in ice and the deep ocean (below 200 meters) holds an average temperature of 4°C. The vastness of this habitat indicates that their numbers could be even higher than thermophilic species. The psychrophiles discovered so far have bewildered our minds. Species from Arthrobacter, Psychrobacter were recently isolated from the antarctic ecosystems. These species displayed cold tolerance of approximately -10°C.

But psychrophiles and thermophiles don’t just survive, do they? They are eating and multiplying. They owe this impossible feat to workhorses smaller than these organisms themselves.

We will get more into that in the next piece.

This article is a part of the series — Enchanting extremophiles and where to find them! Find the rest of the articles from this series here. 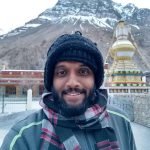 Jithin is a final year PhD student from SRM-IST, Kattankulathur, Chennai. His work is mainly focussed on applying computational biology in the field of extremophile research.

Of Transition and Grit: Journey of a Researcher from Guwahati