Himangshu Prabal Goswami was born in Tezpur, Assam. As a kid, he was fascinated by the fictional characters of sci-fi classics. He says, “Comic books are a way to see scientific imagination coming to life.” He studied at Don Bosco High School, Tezpur, and chose an atypical path to learn basic sciences as opposed to his family’s wish. He majored in Chemistry from Cotton College, Guwahati (Now Cotton University).

During his master’s, Himangshu discovered various prestigious foreign universities. With a good GRE test score, he was ready to apply to multiple universities. But he could not afford the individual application fees of each university. Moreover, Himangshu was reluctant to apply for a loan and hence dropped the idea of pursuing a PhD abroad, considering his family’s financial condition.

Guidance from his PhD supervisor and insights provided by friends trained in Physics helped Himangshu gain command over Quantum Physics. Once, Dr Sood, a professor of Physics at IISc, sharply told him, “You may be from a chemistry background, but research doesn’t ask you for your discipline; it only demands your undivided interest at the cost of your struggle.”

Himangshu is the first student of his supervisor and a first-generation PhD. While talking about IISc, he reminisced about the extensive scientific discussions he would have with his supervisor. He remembers, once a conversation started at 9.30 AM and concluded at 7 PM! “That was the day I learnt, science needs time and openness in one’s approach“, said Himanghsu. During the initial years at IISc, Himangshu collaborated with Prof Mukamel, professor of Physical Chemistry at the University of California, Irvine, USA. He advised Himangshu to stay confident to pursue science.

In his journey in STEM, Himangshu had the chance to meet Dr Kosterlitz, a Nobel laureate in Physics (2016), for explaining superconductivity in a two-dimensional material using topology. He advised Himangshu, an area of research should be chosen according to one’s interest, even if it meant being the sole researcher involved in it. Himangshu worked as a guest scientist at the Max Planck Institute, Germany, after his PhD, before returning to India. Soon after, he started teaching as an Associate Professor at Gauhati University, Guwahati and is currently establishing his laboratory. Himangshu wants to impart his expertise to the younger generation. “The North-East Indian minds deserve a taste of global exposure“, he asserts.

Himangshu is currently working on Quantum Thermodynamics, where the principles of Thermodynamics and Quantum Mechanics intersect. In addition, Himangshu develops mathematical models to study energy-efficient, ultrasmall devices (size≤100 nanometers). In ultrasmall devices, the electric current can arise due to the flow of electrons, heat or ions. Himangshu is trying to understand this current flow and its fluctuations in ultrasmall devices using artificial intelligence. This research will aid the development of highly efficient and long-lasting devices and quantum computers, too. The advancement of quantum computers in healthcare, defence and finance could revolutionise lives. Himangshu aims to establish a connection between the principles governing the flow of electrical signals in neurons and electrical devices in the long run.

Himangshu stated the lack of funds and outdated infrastructure as two significant obstacles in STEM growth in Northeast India. In addition, the negligence of the STEM sector in Northeast India is taking a toll on young minds. “Most of the young minds now believe that, no matter what, funds won’t be made available in the Northeast!” says Himangshu.

Himangshu feels competition and the denial to share research resources between various institutes in India is leading to the slow-paced development of STEM across the nation. He thinks promoting the peers from Northeast India to participate at national science conferences, robust funding policies, and government schemes can strengthen the STEM growth in Northeast India. In addition, he suggests setting up independent redressal cells by scientific organisations for North East STEM members to resolve issues faced by them.

Himangshu is translating academic literature into the local Assamese language. He hopes to spark the interest of the local population in science research by making it relatable. He thinks language is another barrier to the growth of STEM in Northeast India. He supports students’ participation in workshops and internships to obtain exposure to the field. He further said that young minds are filled with curiosity which might get doused with the fear of asking queries and discouragement by teachers or parents. Therefore, he advises the young generation to keep asking questions fearlessly!

This article is a part of the series People of North-East India.

Acknowledgements: SciRio thanks Dr Himangshu Prabal Goswami for allowing us to use the images in the piece. 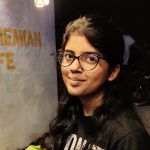 I am a masters student at the University of Hyderabad. I am a sophophile and a painter who loves to be surrounded by books. I like to tell and listen to vivid stories. I think the wisdom of science should pervade through the masses. To realize the potential of the concepts and knowledge of science to its fullest, it should reach the grass-root level of society. I feel science communication can aid the development of a scientific perspective in people. I entered the field of science communication to contribute my small share in doing the same.

My hands are shaking, do I have Parkinson’s disease?

Green Renaissance for the Blue Dot