An architect shares her learnings from a  webinar on Trees and Ecology of the Andamans. You can find such events reported here.

Krishna Anujan is an ecologist currently pursuing her PhD at Columbia University, USA and studies tree diversity in the Andamans, a group of islands off the coast of India in the Bay of Bengal. In a recent webinar hosted by the Cochin Natural History Society (CNHS), first in the series, Krishna chronicled the ecological value of the Andamans, a biodiversity hotspot via stories of birds and plants unique to the island. She depicted the complex roles trees play for birds, the environment, and detailed their ecology without any scientific jargon!

Andamans are a group of islands off the coast of India in the Bay of Bengal. Krishna described the ecological value of the Andamans, a biodiversity hotspot. She showed us several images of birds and plants unique to the Andamans! She went on to explain the various roles that a tree plays in relation to birds, the environment, ecology and diversity.

Cleverly asking us “Do you see where the bird is perched?” Krishna drew our attention to the specific tree atop which the bird was perched, gently reminding her listeners that birds cannot survive independent of trees. Birds require trees to nest, rear their young, attract mates, establish territories and also to feed, both on the fruits found on trees and the insects that swarm them. Referring to the saying common among bird enthusiasts, “being at the right place at the right time” to spot a bird, Krishna explained that the right place was always a specific tree and the right time was when a tree was flowering or in fruit.

She then introduced to us the trophic pyramid in order to highlight the role of green plants in the environment. Green plants are producers that produce energy for more complex organisms to survive through the process of photosynthesis. Krishna then deftly moved to various aspects of ecology. Trees, though seemingly lifeless, were represented by Krishna as literal lifesavers. They play so many roles including influencing rain patterns, cloud cover and soil conservation, balancing nutrient content, supporting numerous lifeforms-an inexhaustible list!

Most relevant to global climate change, however, as pointed out by Krishna, was the role trees play in the Carbon cycle, by absorbing the carbon dioxide in the atmosphere and releasing oxygen into the atmosphere. Trees also have an astounding ability to store excess carbon without releasing it, throughout their lives indefinitely, unlike other carbon-based life forms. The statistics she shared showed that the value of greenhouse gas mitigation by forests is a whopping 3.7 trillion dollars!

Krishna then spoke to us briefly about her research in tree diversity in the Andamans and her findings on the advantages of tree diversity, especially its ability to increase the survival rates of vulnerable trees, along with being useful for climate solutions such as strategies to improve regeneration, create models specific to a location and global climate concerns.

The session ended with a Q&A round where participants were given an opportunity to question Krishna on the talk and also other topics relevant to ecology. Some of the questions included “What is the role played by local population/ tribals in forest conservation?” and “Clarity on birds and seed bombing”. The questions grew more interesting! Krishna was considerate and tried to answer as many as she could. Hence, through Krishna’s experience, research, and insight the audience was able to understand the huge role played by trees in our everyday lives. We can take the first step to acknowledge this excellent initiative by helping conserve the trees in our world and grow more of them. Krishna was also kind enough to share a few extra details about trees which can be accessed through the following links! 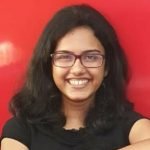 Nairika is an architect and a nature enthusiast. She has travelled extensively, loves reading and dabbles in crochet and knitting.

Behind the Scenes with Suchitha Champak – SciComm Lite 1.0